Free Shipping on Orders over $150 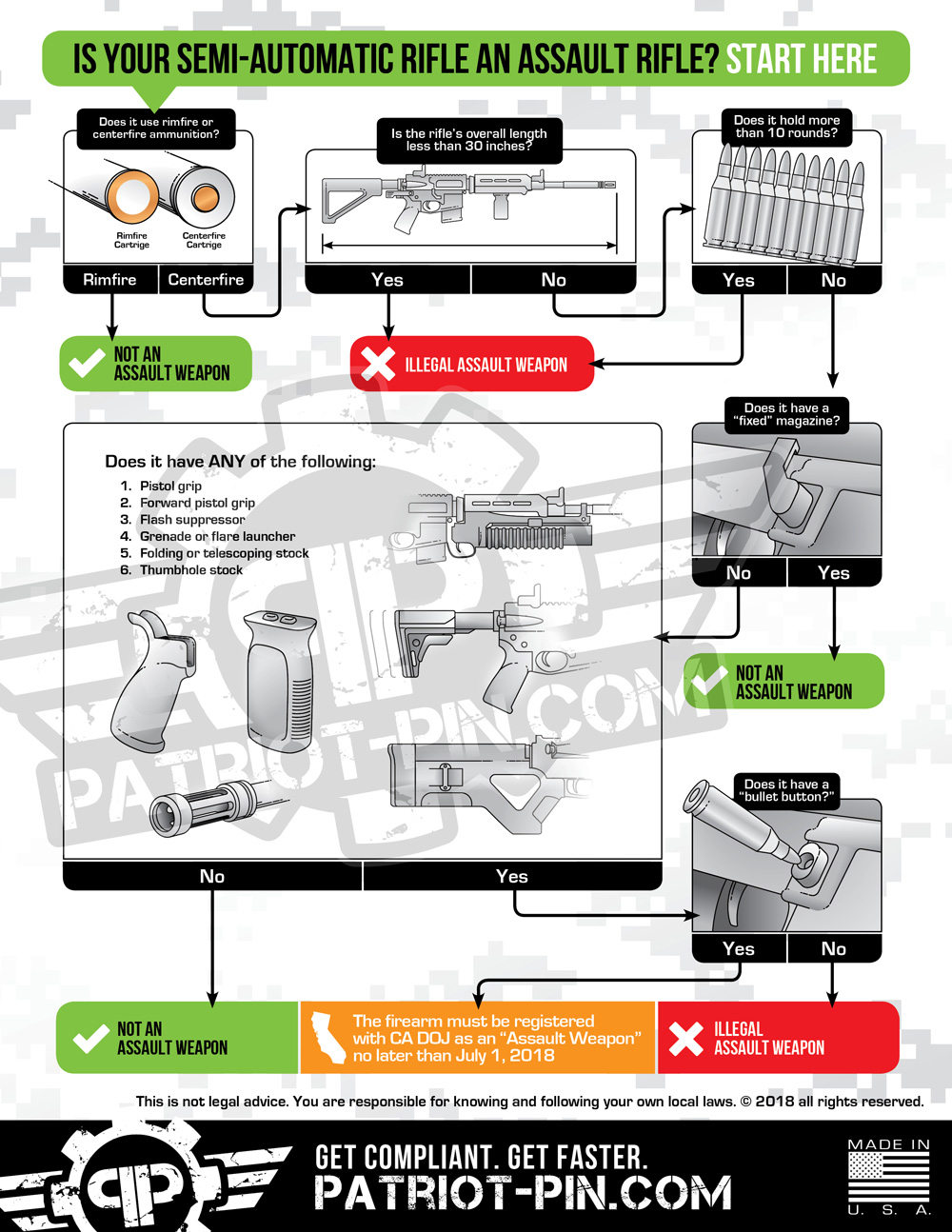 The Penal Code now classifies the following as an AW: RIFLES: A semiautomatic, centerfire rifle that does not have a fixed magazine but has any one of the following: (A) A pistol grip that protrudes conspicuously beneath the action of the weapon, (B) A thumbhole stock, (C) A folding or telescoping stock, (D) A grenade launcher or flare launcher, (E) A flash suppressor, or (F) A forward pistol grip.

“FIXED MAGAZINE” - An ammunition feeding device contained in, or permanently attached to, a firearm in such a manner that the device cannot be removed without disassembly of the firearm action.

“DISASSEMBLY OF THE FIREARM ACTION” - The fire control assembly is detached from the action in such a way that the action has been interrupted and will not function. For example, disassembling the action on a two-part receiver, like that on an AR-15 style firearm, would require the rear take down pin to be removed, the upper receiver lifted upwards and away from the lower receiver using the front pivot pin as the fulcrum, before the magazine may be removed.

WHAT ARE MY OPTIONS TO STAY OUT OF TROUBLE IF I OWN A NEWLY DEFINED “ASSAULT WEAPON”?

1. REGISTER: A firearm that was lawful to acquire and possess last year but now is considered an AW can be registered on or before July 1, 2018. Once the registration system is active, you can register at: https://cfars. doj.ca.gov/login.do NOTE: Any AW may be “jointly” registered with another family member over the age of 18 (including a parent, grandparent, child, grandchild, or sibling) who resides with you. But they must separately complete the AW registration.

2. MODIFICATION: You can modify your firearm so that it is no longer an AW. This can generally be accomplished in two ways:

B. “California Compliant Build:” If you remove one of the three prerequisite features for the new “assault weapon” definition (i.e., for rifles: semiautomatic, centerfire, or not having a fixed magazine) the firearm can then still have all of the features listed in A-F (with the exception of the grenade launcher). Most firearm owners choose to install an aftermarket device on their rifle that causes the firearm to have a “fixed magazine.” The parts replace the “bullet button” magazine lock. The devices prevent the magazine’s release unless/until the upper receive is pivoted up from the lower receiver of the firearm. Because removal of the magazine requires “disassembling the firearm’s action,” the magazine is considered “fixed.” Some owners are choosing to affix their magazine to the firearm by welding or epoxying the magazine to the receiver and then loading the firearm through the chamber breech. Some are converting their rifles from centerfire to rimfire. While others are restricting their firearm’s ability to function as a semiautomatic.

This is not legal advice. You are responsible for knowing and following your own local laws

The California Legislature recently passed a law mandating registration of all assault weapons. SB 880 will require that all assault weapons owners register their firearms with the CA DOJ, to include AR-15 firearms with magazine locking devices requiring a tool or bullet to remove the magazine. The registration shall contain a description of the firearm that identifies it uniquely, including all identification marks, the full name, address, date of birth, and thumbprint of the owner, and any other information that the department may deem appropriate.

SB 880 amends the definition of an assault weapon to refer to a rifle that has one of several specified military-style features and “does not have a fixed magazine,” rather than a gun with one of those features and the “capacity to accept a detachable magazine. Continued legal possession requires that you REGISTER and pay a FEE (TAX) on ALL your semi-autos newly classified as “assault weapons.”

These new laws apply to rifles that do not have a fixed magazine. The laws define “fixed magazine” as an ammunition feeding device contained in, or permanently attached to, a firearm in such a manner that the device cannot be removed without disassembly of the firearm action. This wording essentially renders other magazine locking devices useless. AR-15 owners now have to disassemble their firearm action in order to release the magazine.

Just to be sure there is no confusion, the new law states (b) (1) Any person who, from January 1, 2001, to December 31, 2016, inclusive, lawfully possessed an assault weapon that does not have a fixed magazine, as defined in Section 30515, including those weapons with an ammunition feeding device that can be removed readily from the firearm with the use of a tool, shall register the firearm before January 1, 2018. See here for exact wording of the law: SB 880.

The ARMaglock is the key component to California compliant ar 15. The Patriot-Pin makes your already compliant rifle much faster to “disassemble” in order to remove and load magazines.